OKAY, FINE, GOD! I might have lied to you twice in a row now (read all about my lies and my wife’s hatred for me here). The truth is my son looks at me with his dopey, way-too-big-for-his-baby-head blue eyes with all the love in the world and then some…now. This, however, was not always the case. My little boy will be 10 months old in two days’ time and for the last 4 months, he has been gradually warming up to me as a poor and inadequate alternative to his mammy. There is no doubt dads will face many struggles in their pursuit to become the father figure they want their sons to look up to. One of the first hurdles as far as the father-son relationship is concerned is the feeling of not being able to build a bond with their baby.

I was warned of this, but I am a man after all: man big, man strong, man does not need to form an emotional attachment with his baby to feel validated! And yet again, for a second time running, I must admit I was wrong (my wife will love my admitting to being wrong). [Ed. Note: she does]. I feel like as a dad you are surplus to requirements during the first 3 months of your child’s life. Sure, you clean, cook, go to work to provide, etc. However, as far as the little dude is concerned, you might as well be a plant or a goldfish. Things get slightly different when your baby starts to engage with the surrounding environment of which, as a sentient human, you are a part. With our baby becoming more robust, more mobile, and most importantly, developing a little personality, I imagined daddy-baby quality time was just around the corner. I watched my wife captivate my son’s attention for hours at a time; I watched her tickle him into fits of uncontrollable heartmeltingly cute giggles; I watched her calm him down in seconds from a full-blown cry to a sunny smile just by holding him in her arms. It didn’t look hard, but try as I might to replicate my wife’s heroics, I could not.

We would sit in bed on a lazy Sunday morning (definitely not afternoon because who spends the whole day in bed, right? Right?!?) with my son in the best of moods. My wife, god bless her, would take advantage of this rare opportunity to have her weekly shower and leave me with the little dude seemingly happy as a clam. Ten seconds later, he would be screaming the house down. I would try the toys, try to make him laugh, play him his favourite nursery rhymes (Baby Beluga and Snowflake for these interested) and even frantically walk him up and down the bedroom, and I would get nothing, zilch, nada! My son’s scream would inevitably cut my wife’s shower short and rather predictably, his cries would cease almost immediately after being back in mammy’s arms. That was hard, but it was about to get much harder.

Due to complicated legislation concerning driver’s licenses, my American wife had to re-take her driving test in the UK (where we currently live). This meant she had to take lessons in order to get accustomed with the local rules of the road, and I had to mind the baby while she took them. The lessons were 1 to 2 hours long, which meant I had to stomach 1-2 hours of my son’s screams and cries whilst he simultaneously refused to be held by me and amplified his tantrums tenfold when put down. All of this was done whilst listening to Baby Beluga over and over and over again.(The magic that is Snowflake was discovered later on.)  It was soul crushing; it felt like my son hated me. He was most certainly letting me know what he thought of spending any length of time with his dad. Obviously, yet again, the minute my wife got her hands on him, he would stop at a drop of a hat and smile at me over her shoulder as if to prove some twisted point to me. I felt insufficient and a failure.

Now, some 4 months down the line, things have changed. Trust me on this, lads: there is a light at the end of this screaming tunnel. As I sit here writing this piece, my wife is busy doing some college work (she is getting a PhD, don’t you know? #humblebrag #proudhusband) and my son is gleefully attempting to climb Dad 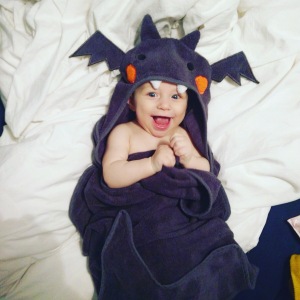 dy Mountain (I am the mountain). I can now be left alone with him and we quite happily spend a few hours playing with toys and doing the airplane. Most importantly, however, when I tickle him, he laughs; he laughs just with me and he laughs just for me, his dad. It’s obvious that a baby is going to develop a strong bond with its mammy; aside from carrying the baby for 9 months, she is the sole provider of food and comfort early on – you don’t need me to explain this to you. But dads, trust me on this one: somewhere between 6 and 9 months, you will get your moments in the sun and they will become more and more frequent as time passes. Just in case you don’t believe me, please find a picture of my baby bat burrito son taken after one of our showers, which we take together now because we are crusty hippies! Doesn’t he look happy to have his daddy?!?

Michael Carter is a tall, strapping archaeologist, with a flair for cooking, a green thumb, a great beard, and an adorable infant son who is looking more and more like his mother every day. His wife definitely did not write this bio.

View all posts by thenewmotherhoodie

One thought on “I Don’t Think My Son Likes Me”