My son is 20 months old and regularly says about ten words: bye bye, dog, truck, ball, Dad, meow*, roar*, ssssss*, uh oh, yes, no, oh dear, and something that sounds suspiciously like “Oh shit,” which despite my foul mouth, I don’t ever say. (However, if he were whispering “Oh, for f**k’s sake” under his breath several times a day, I might be responsible.)

He can also express his confusion about where things are by throwing his hands up near his shoulders in a permanent shrug: 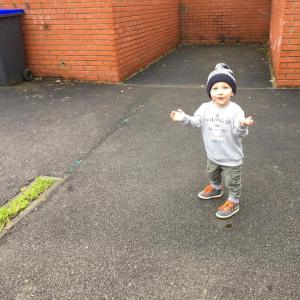 I have spent a lot of time super frustrated and mildly panicked about this child’s lack of verbal communication. It seems like many (most?) kids his age have, at the very least, more robust vocabularies, and at the very most, the ability to hold complete conversations with their parents. Reminding myself that we live in a world of never ending competition, as we all try to impress and outdo each other on social media, helps me stay sane while I parent my son who refuses to speak. Our desires to present ourselves as brilliant and successful have trickled down to our infants, such that even actual babies are now expected to perform academic or physical feats once reserved for preschoolers. (Seriously. Why would I want to pay someone to pretend to teach my baby to read?)

In an effort to focus on the positives and stay grounded in the comforting knowledge that my child is a behaving like a toddler because he is a toddler, I’ve decided to make a list of my son’s most impressive skills. Here they are, in no particular order:

*Yes, I am counting animal noises as words. YES I AM.

Sarah Carter is a PhD student, blogger, wife, expat, and new mom crazy person. She’s currently focused on getting The New Motherhood off the ground (while writing up her second PhD paper and taking care of her baby), but if you’re into snooping and terrible photos, check her out on Instagram.